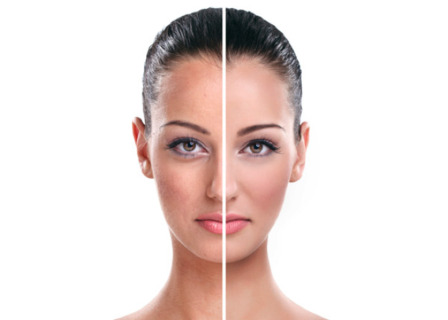 You love the glow you develop during the summer, don’t you? Often times, however, you get a little more than you bargained for. And that “glow” well…let’s just say it turns into a series of blotchy spots.

Many people experience hyperpigmentation (dark spots) after being out in the sun. This uneven skin tone can also result from hormonal changes, such as those that occur during pregnancy, menopause, or from injury or inflammation of the skin due to acne, eczema or psoriasis.

Luckily there are ways to help lessen, and in some cases completely eradicate, this dark dilemma. Read on for ways to achieve a healthy and radiant complexion.

Microdermabrasion is a gentle approach to resolving hyperpigmentation. Microdermabrasion is used to lessen fine lines and discoloration, and to treat an uneven complexion caused by sun damage, light scarring and stretch marks. After just one microdermabrasion treatment, you’ll see a major improvement in skin tone, skin brightness, clarity and radiance.

Chemical peels are typically applied to the face and cause the underlying cells to literally slough off, revealing the new skin, which is softer, lighter and more luminous. After a chemical peel, your new complexion is glowing and youthful, with a smoother, softer texture. Chemical peels also greatly reduce the appearance of facial lines and acne scars.

The latest breakthrough in laser technology, PicoSure delivers energy in short bursts to target and eliminate pigment without causing harm to the surrounding skin. This FDA approved laser renews your skin by erasing unwanted hyperpigmentation, freckles and age spots, with remarkable results in fewer treatments compared to other procedures. Read more here about what it does for unwanted tattoos! 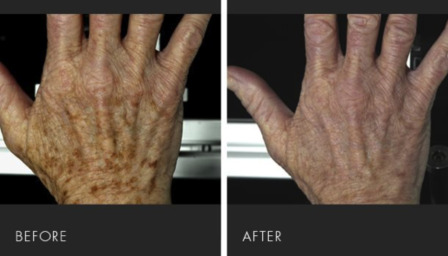 Hyperpigmentation treatments with the PicoSure Laser

Looking for an at-home treatment?  Try Obagi Products! Reserve an appointment for a complimentary consultation today.

To learn more about these effective, non-surgical and non-invasive beauty treatments, call us now on 305.648.1936.

It seems like everyone has a tattoo these days. But not everyone who has one wants to keep it. Tattoo regret is common, but living with the regret doesn’t have to be.

As the number of people with tattoos increases, so does the need for improved tattoo removal methods.  The process has evolved from harmful treatments, such as acid removal and excision of the skin, to simple, easy, quick treatments like L’Arte Della Bellezza’s state of the art PicoSure laser, now being used to remove those unwanted tattoos.

Tattoo removal methods are not one size fits all, and it’s important to understand the differences between them. Below, we outline some major guidelines regarding tattoo removal.

1. Not all Tattoos Disappear at the Same Rate

It’s important to set your expectations by speaking with a laser treatment expert. Some tattoos fade only partially after certain treatments. The PicoSure laser available at L’Arte Della Bellezza delivers energy to the tattoo ink in picoseconds – which is a trillionth of a second – compared to other lasers that deliver energy in a nanosecond, or a billionth of a second. According to CynoSure, the developer and manufacturer of the PicoSure Laser: “Traditional nanosecond lasers predominately rely on photo thermal action, delivering heat to the pigment and surrounding tissue. PicoSure takes advantage of Pressure Wave Technology to shatter the target ink into tiny particles that are easily eliminated by the body.”

2. Older Tattoos are Easier to Remove and Their Location Matters

With laser treatments, older tattoos fade more easily than newer ones. Fading is also generally slower for tattoos located further down the arm or leg.

3. Some Lasers are Less Painful Than Others, and the Downtime for Each Varies

The PicoSure system is less painful and less expensive than other tattoo-removal treatments. With PicoSure, there’s no downtime! There’s also less time needed between appointments! Find out more about the number of treatments, here.

Laser treatments may darken or lighten skin pigment over and around the tattoo, just as the sun darkens skin upon exposure. To minimize changes in your skin tone, apply sunscreen daily, both before and after laser tattoo removal. You should also contact your skin care expert and ask for a recommendation.

6. Myth: No Laser Can Remove all Tattoo Colors

Before PicoSure, no single laser could remove all tattoo colors. But Cynosure’s PicoSure laser, which utilizes breakthrough, cutting edge technology, has been proven effective at removing all tattoo ink, including blue, green and purple hues.

When the warm South Florida weather starts to cool, it’s important to be …